multichannel, ambisonics audio-video live performance, premiered at A4 Bratislava on May 20th 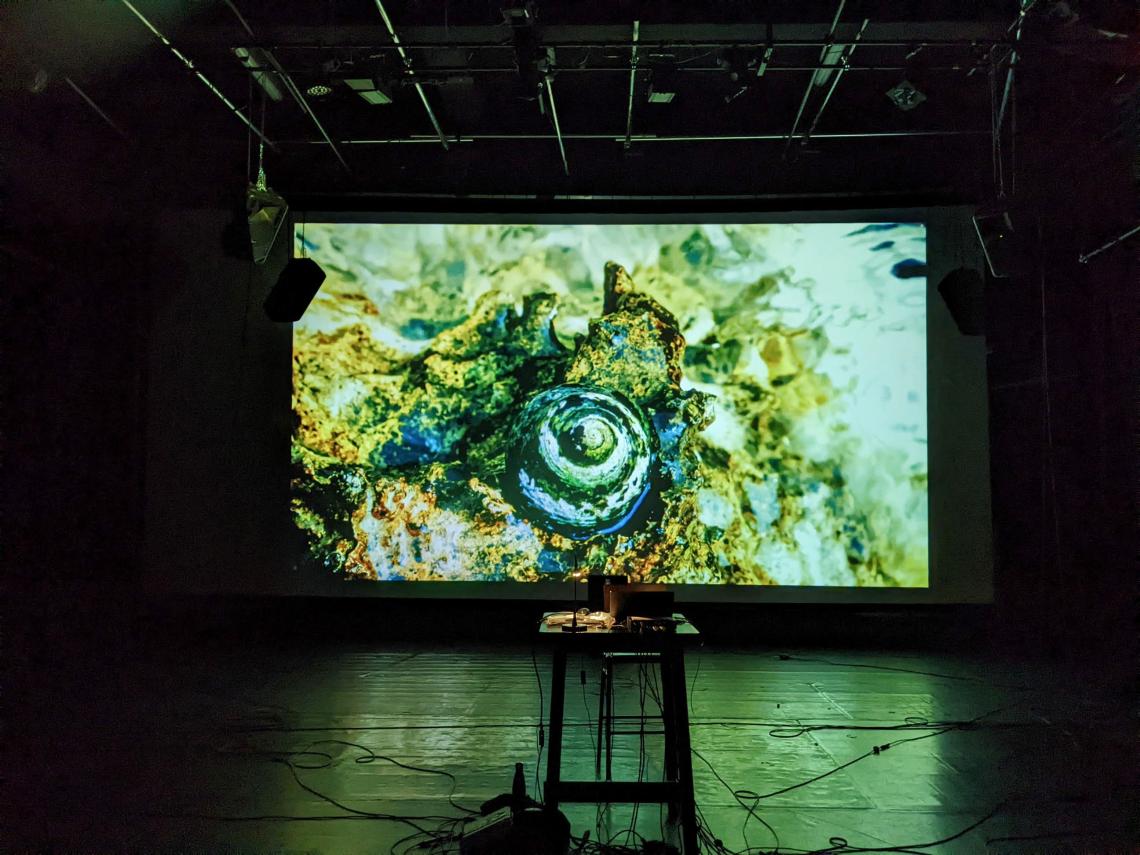 FULCRUM is a multichannel, ambisonics audio-video live performance concerning ecological loss caused by climate crisis and a looming environmental and societal disturbances, eventually - wars that come with it. Recent Covid 19 emergency can also be regarded as a part of wider consequences of a non-sustainable growth. Current Russian aggression and unspeakable atrocities towards Ukrainian civilians is also the blunt example of a delicate balance our everyday existence relies upon. Burning hydrocarbons destroys both our planet and democracy, fueling now the worst war in Europe since 1945. Corrupt politicians are still willing to pay millions every day from our pockets to the Russian fascists' war monster for their gas and oil, bringing huge change to the peaceful life we once enjoyed in the EU.

We need to familiarize ourselves with this situation and grieving is part of it. There's also a need for new spiritual strategies and here the concept of Dark Ecology by Timothy Morton comes handy. "This is the state of affairs of the Anthropocene, where ecological awareness (...) implicates us all in some sort of environmental film noir: just as the detective is also the criminal, the philosopher is part of the massively distributed thing that is the human species and contributes to mass extinction".

FULCRUM implements a fully multichannel, polyphonic ambisonics synthesis and spatial sound propagation from the ground-up, using state-of-the-art virtual modular environment combining various techniques to create a unique sonic and composing experience. It can be tailored to a different existing speaker arrays, bringing spatially rich electronic compositions to the widest possible audience and venues, at the lowest possible cost. It can drive 4 or 64 speakers, and anything in between, also unusual floor plans, scaling seamlessly according to given possibilities.

The compositions are prepared with surround information embedded directly into every instrument's characteristics - each note is routed and spatialized independently via complex audio synthesis and propagation chain - single sound's building parts can be scattered around in virtual space. Such a strategy differs widely from the more common approach of adapting stereo tracks to multichannel setups, leading to much more detailed and sophisticated modern electronic sound experience.

A clear avant-garde and electro-acoustic heritage of FULCRUM combined with spatial awareness bring to mind the figure of Iannis Xenakis, an important pioneering 20th century Greek composer. All compositions extensively employ a number of procedural, parametric or algorithmic tools and strategies, both in sculpting sound timbres and notes character or occurrence. Also the spatial characteristics of instruments are programmed to allow for lively and sometimes unexpected resolutions. All these parts brought together create a living, breathing musical organism, a development and performance tools that are custom-tailored using the newest synthesis and spatial sound technologies.

The corresponding contemplative videos of nature were captured over the last 3 years in many European places cherished by the artist for their simple beauty and fragility.

FULCRUM was developed during artist residency at A4 in Bratislava, supported by Visegrad Fund

View the embedded image gallery online at:
https://www.wilhelmbras.com/live/item/965-fulcrum-2022#sigProId2b448fd771
back to top